Another compilation of clips of guys in various kinds of intense bondage. Check out the guy at around 1.40 chained and hanging from his neck. Struggling for freedom just isn’t an option!

Web Compilation 3 uploaded to xtube at:-

For fans of bondage and skintight white lycra shorts…

This muscled boy is clearly in love with himself and needs to have his freedom taken away. His arrogance needs to be totally shattered and he needs to be taught a lesson in humility. He clearly needs to be kept in restraints for several days. 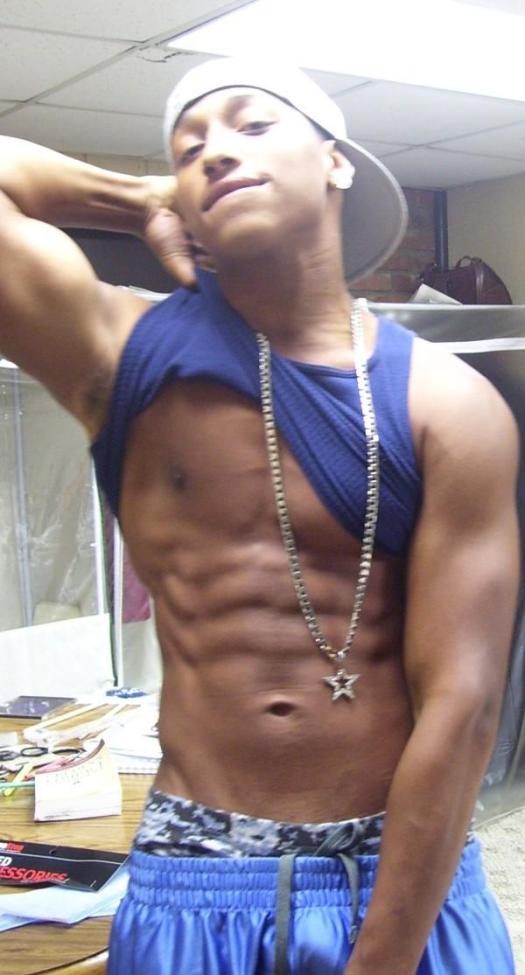 Firstly, he should be kidnapped and taken to an unknown location. He should be straight jacketed, roped tightly hand and foot and then gagged and blindfolded for transport.

Upon arrival at his place of imprisonment, he should be stripped down to tight revealing shorts. During the day, he needs to have his wrists shackled behind his back. A metal collar should be locked around his neck and he should remain chained to the wall in a dark cellar for long periods of time. He needs to be gagged so that he knows his can’t reason with his captor and beg for freedom.

During the night time, he needs to be stretched out and tied securely to a bed. 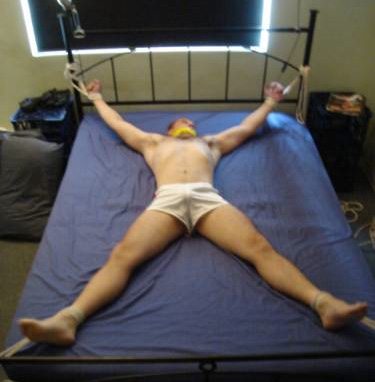 He needs to know that there is no chance of escape. He needs to spend long periods of time shackled hand and foot and locked behind the heavy bars of a cage. 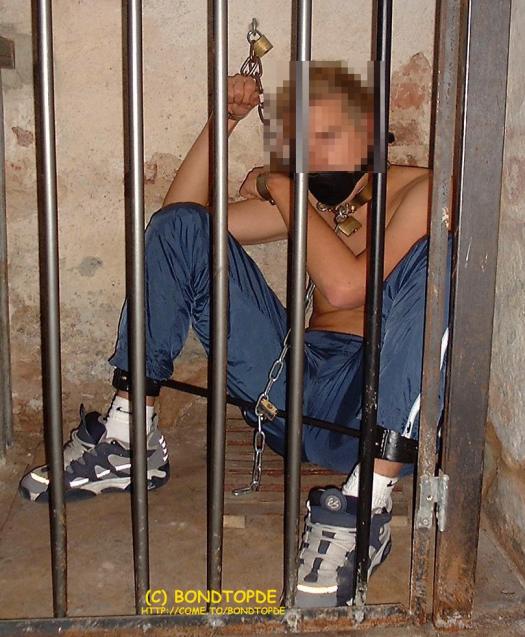 His heavy metal collar should be firmly locked around his neck and used as a painful way of breaking his will and letting him know that he is an object to be kept under permanent control.

He needs to learn that bondage, restraint and imprisonment is his natural state. There will be no release…

The low groan of the forced release of sexual repression issued out from behind the gag as the spikes burrowed their blunt tips into my sensitive parts that were currently yearning to break past the cage’s embrace.

John just sat beside me, watching, observing. Every now and then he would reach out and stroke my head with his gloved hand. This only succeeded in kicking my clouded mind in to overdrive. The animalistic response was purely instinctual in nature, as I pushed back against his hand with my head; much like a cat would, in an attempt to show my appreciation for his attention.

Then all of a sudden, it ended as quickly as it began.

John stood up and took the filter with him, the fog in my head slowly lifted as I became increasingly aware of the burning fire in my crotch. I began to thrash around and complain in muffled grunts against my gag. John just chuckled to himself as he turned his attentions back to the mass of wires he had brought in earlier.

From sheer pleasure to burning pain… He controlled what I felt and how I felt it. This was beyond being restrained, being captured. I was beginning to see that being locked down to this bed in this cell was only the beginning of the trials I was to face that he only knew the end to… if such an end existed.

END_OF_DOCUMENT_TOKEN_TO_BE_REPLACED

I was left here alone, barely able to move, hooded, in pitch black, with only my thoughts, my own mind, to keep me company; I began to reassess all that I had been through. In less than a day my situation had been transformed from one form of captivity to another.

John had very calculatedly, one-by-one, taken away all of my defenses that I had built up against my own desires. Even now as I fought against my bonds I could feel every sob, every terrified whimper drop me deeper into the submission I have craved for so long.

I strained against the straps that held me tightly to the deep padding in the darkened corner of the cell. My only bearings upon anything but the darkness was a single air vent above the doorway that sent a stream of light across the room splashing against the floor only feet away from the shadowy corner that held me captive.

I had a very limited field of vision as the racing harness that held my shoulders down rendered me unable to lift my head too far off the bed, and the walls of the room being black made judging distances in the dark next to impossible. I did my best to get a survey of the room, to figure out what else resided in here besides me.

END_OF_DOCUMENT_TOKEN_TO_BE_REPLACED

Dave had asked me to meet him at the airport; I had arrived In Philly 4 hours before he was scheduled to. This was the vacation that he had hounded me to go on for years. We were out here to meet his parents; he finally was going to introduce me to them as his lover. Our travel agent screwed things up so we ended up on two different flights, arriving at two different times.

By now you are saying ‘OK, we figured out who Dave is, but who are you?’ Well dear reader, my name is Joe: 24, 6’2” 168 slim, trim, fit…All right, so I am a twinkie, but beyond my outward appearance was a darker side that I never had the guts to tell Dave. I wanted to experience a new world full off control, and lack there of. I wanted to experience the feel of synthetics that escalated the very essence of my soul the very way that no normal sexual encounter could. To be held captive in layers of head to toe rubber, where my only connection to the outside world is the soft sting of the straps biting into my skin when I attempt to readjust my sore muscles. I had fantasized about this many times, but up until this point, I had never found the courage to try.

However, as they say, no guts no glory, and guts was an area I was severely deficient in. My online friends teased me about it all the time, flaunting their exploits in my face like waving food in front of a starving child. What was I doing about it? Nothing, a small collection of rubber gloves that I kept hidden in the shed out back, and every once in a while I would creep into Dave’s Shop and play with the Scott respirator that he used for heavy painting jobs. It was sad, Pitiful really. I mean I loved Dave, and knew that I could spend a Vanilla relationship with him for the rest of my life… However, before I did, I needed some chocolate.
END_OF_DOCUMENT_TOKEN_TO_BE_REPLACED

Click HERE to visit the blog containing the re-uploaded videos for Prisoner 20. 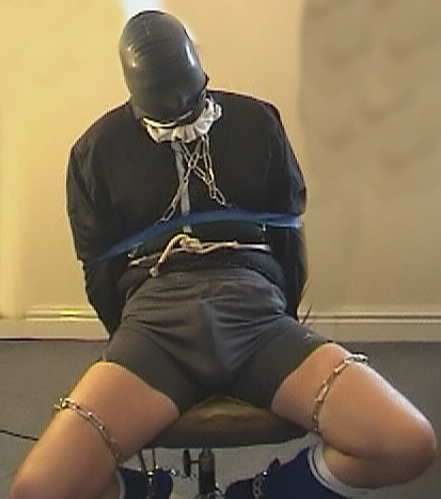