I’ve written before abut my tie-up adventures with my aunt and Derek. They have agreed to tie me up once in a while, and I’ve enjoyed the two times they’ve done it so far. My aunt and her partner, Derek, now call me “Bee-Bee, the TAG Kid,” meaning “Bondage Boy, The Tied and Gagged Kid.” My aunt says my liking to be tied up is great because she’s always wanted to dominate a man and Derek isn’t interested.

The last time they tied me up, I was tied for a day and a night, and I really liked it. After that I reaffirmed the agreement that they could tie me up any time they want, for as long as they want, wearing anything they want, without warning. I also added that I cannot take back that agreement which was something new.

Sadly, the end of the college year was coming, and I would be with my aunt and Derek only a few more days. Friday evening, nothing happened, and I was really disappointed, although I didn’t say anything to them. I knew my aunt was having a catered lunch party around the swimming pool on Saturday so they wouldn’t have me tied up then. Sunday they would be away with friends and they said they would never leave me alone when I was tied up. I went to bed Friday a bit disappointed.

Sometime in the night – I have no idea when, I woke up feeling something happening to my arms. I’m a sound sleeper, so didn’t realize what was going on at first – but quickly understood that my arms were up over my head stretched out, and being tied to the corners of my bed.
END_OF_DOCUMENT_TOKEN_TO_BE_REPLACED

Bondage isn’t bondage without a good gag. Having the voice taken away is an important part of the loss of control and identity for the victim.

The prisoner stops being a person and becomes an object.

The prisoner was left to struggle in good, old fashioned rope bondage:- wrists, arms, ankles, knees and a couple of tight ropes though his crotch.
Handcuffs were locked tightly around his wrists to further prevent his escape. Plastic straps and a belt were also used to enhance his captivity.
Underneath the rubber hood his mouth was stuffed with cloth and then duct tape was wrapped round his head several times forming a very good seal.
The prisoner’s clothing for this period of captivity was a black PVC t-shirt and skintight black PVC cycling shorts.

Imagine it. Chloroformed, kidnapped, stripped and then waking up like this. What would go through your mind? Would you cope with the panic? Is this your fantasy or your nightmare? 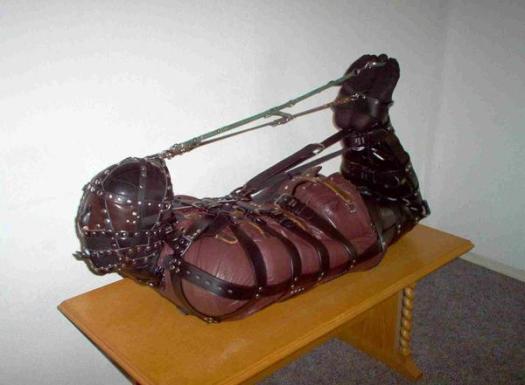 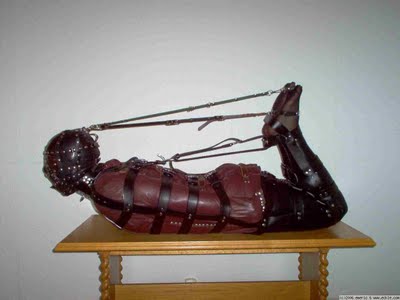 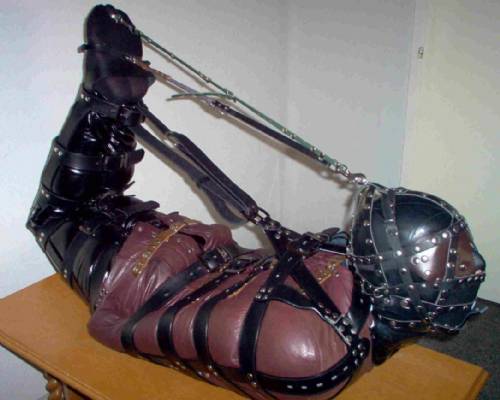 After the first time my Aunt and Derek tied me up, my aunt and I spent some time looking at pictures on web pages for ideas on how to tie me up the second time. We had a bargain that she and her partner, Derek, can tie me up any time they want, any way they want, for as long as they want but I had to wait until she and my Derek were ready.

My aunt assured me that when she and Derek tie me up, they would never leave me alone for very long. But, my aunt said, nothing else would be negotiated.

END_OF_DOCUMENT_TOKEN_TO_BE_REPLACED

I’d love to see the England players kept like this. Maybe they’d play better if this was used as a punishment… 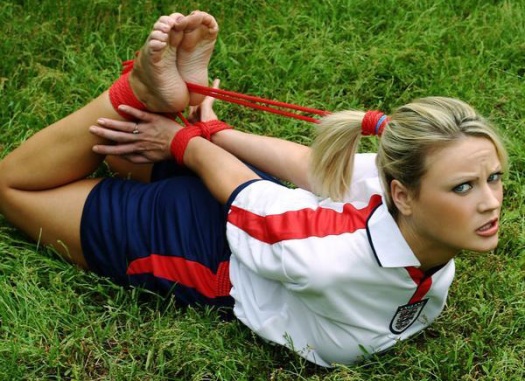 A further period of this extremely uncomfortable and claustrophobic form of restraint was required for the prisoner.
The prisoner’s wrists were cuffed behind his back. He was placed sitting in a cross legged position and his ankles were chained together so that he could not uncross his legs. Chain was then wrapped around the prisoner’s neck, around his thighs, back around his neck and then padlocked down to his ankle chains. The chains were pulled very tightly so the prisoner’s neck and head were forced forward towards his ankles.
The prisoner was made to wear the usual PVC top and a pair of small child size, silky, black, shiny 1980s style soccer shorts.
His mouth was stuffed with a cloth and golf ball which was duct taped into place. The skintight rubber hood was once again applied.
This method of restraint does not cause pain but it is extremely uncomfortable and does create feelings of absolute helplessness, fear and claustrophobia. Ideal for a prisoner who needs to know who is in charge.

The prisoner’s wrists were cuffed behind his back. His ankles were crossed and chained together. His wrists and ankles were connected with a short length of chain. A chain was padlocked around the prisoner’s neck, passed through his legs and fastened to the bed frame. The prisoner was made to wear a PVC top and skintight rubber cycling shorts.
The prisoner was gagged with a golf ball and several layers of duct tape. A skintight rubber hood caused further breathing difficulties…