Tom Daley lay face down in his cold metal coffin like prison. He had given up struggling. There was no possibility of escape. Duct tape kept his limbs securely bound and straps locked him to the inside of the casket in which he was being kept prisoner. He wore only his tight blue training speedo.

Tom could move his head from side to side but that was the only movement which his restraints would allow.

Tom lay still and concentrated on breathing through his nostrils. He was unable to take in air through his mouth. It had been stuffed with one of his speedos and the layers of duct which had been wrapped around his head held it firmly in place. The speedo tasted of chlorine.  It had been taken straight from his training bag and had not been washed.

His balls ached. Because he was lying full length and face down on the hard metal base of his tiny prison, they were being crushed between his body and the firm, cold surface. He wriggled as best as he could to achieve some sort of comfort but his restraints held him tight.

Tom waited. He was scared. The urge to panic remained but he worked hard to control it. There was no point in struggling. He focussed on conserving his energy. If the chance to escape came he needed to be ready.

He was unaware of how much time had passed. Thirty minutes? An hour?

The van in which he was being transported had driven steadily for a while. However, it now felt like it had gone off road. It had slowed and it felt like the road had become very bumpy.

Tom shivered inside his metal prison. Moisture from his skin had transferred itself to the inside of his casket. His hair was still moist. His tight speedo was still damp and clung to the contours of his body. Tom normally felt very comfortable wearing his tight little speedos but right now he felt naked and exposed.

The van slowed and came to a halt. Tom waited in the silence. His heart raced.

He heard the sound of the van doors being opened. Seconds passed.

The sound of heavy footsteps inside the van startled Tom. He felt the metal casket being lifted. He was being moved.

Tom’s coffin like prison tilted as he felt himself being carried out of the van. Several minutes passed and Tom strained to hear any kind of clues as to where he was being taken. He heard only silence. It suddenly occurred to Tom that not once had he heard one of his captors speak. 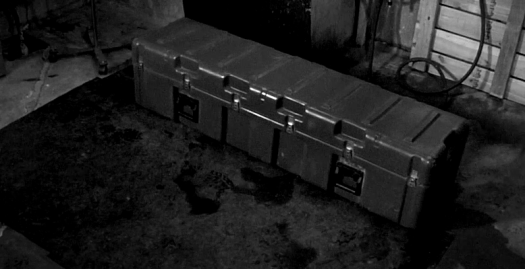 With a loud crash, Tom’s container was suddenly dropped on the ground. There was a rattle of locks and the lid was opened. Tom tried to twist his head to see where he was. He didn’t have long to wait.

The metal container was tipped onto its side and Tom fell out onto a cold, concrete floor. He managed to stop himself rolling onto his front. He lay on his sides, his bound hands nestling in the small of his back and his restrained legs bent and pulled up towards his body almost in a foetal position.

Tom’s eyes struggled to adjust to the gloom. Wherever he was, there was very little light. The floor upon which he lay was grimy and black. It smelt of engine oil.

Tom could see dirty brick walls, old cupboards and several grimy work surfaces. It looked like he was in some kind of old, abandoned car workshop. There didn’t appear to be any windows only a large set of doors in one wall and a single door in the opposite wall.

The roof above him appeared to be quite high. Metal beams held the corrugated metal roof in place and chains hung from several pulley systems.

Tom suddenly became aware of movement behind and and rough gloved hands suddenly pushed him back onto his front. He ‘mmmmmppphhhh’ed into his duct tape gag in protest.

Tom felt his ankles being grabbed. With a sense of relief, he realised the duct tape was being cut from his ankles and knees.

His relief didn’t last long. Tom felt cold metal on his legs. Wide, heavy iron shackles were being bolted onto his ankles. They were chaining him up.

Tom began to struggle but hands held him firmly down on the oily concrete. He tried to yell but the speedo taped in his mouth prevented him from making much noise.

The duct tape was cut from his wrists and Tom felt shackles being locked around them.

The duct tape around his upper arms was cut and pulled from his back. Strong hands flipped him over and removed the rest of the tape from his chest. It pulled cruelly on his skin and made him yelp into his gag.

The three leather clad captors picked up Tom and stood him on his feet. They pulled his wrists in front of his body and padlocked a short heavy chain – perhaps three links – between his shackled wrists. They then attached a similar short chain to each of his ankle shackles.

Tom struggled desperately but a quick punch to his balls from one of his captors made him double over with pain.

One of his kidnappers walked over to a wall where a small panel of buttons was fixed to the wall. He pressed a button. With a rattle, a chain above Tom began to lower until the end of it was level with Tom’s chest.

Tom manacled wrists were grabbed and padlocked to the dangling chain.

With horror, Tom realised what was going to happen.

Hands which had been holding him firm suddenly released him. The second and third captor walked away from him and left him standing unsteadily. They stopped and turned to face him.

Tom stood up straight. He wore only a tight blue speedo. Oil and grime had appeared on parts of his body. His wrists and ankles were chained. He was gagged.

Tom heard the pulley system once again start to clank and whir. He looked over to the wall where a leather clad kidnapper was operating the control. Tom desperately shook and head and tried to scream out.

The chain started to pull Tom’s wrists up towards the roof. Higher and higher his shackled wrists went until they were directly above his head.

The manacles dug painfully into Tom’s wrists as his arms began to bear the weight of his body. His wrists were pulled ever higher. Tom’s shackled feet began to lift and he had to stand on tip-toe to maintain contact with the grimy floor. And then the chain stopped. The pulley system had been switched off.

Tom looked over at his captor who stood by the panel. He still had his hand on the control. Once again, he pressed the button.

Tom screamed as his whole body was lifted off the floor. Tom’s shoulders burned. His wrist manacles felt like they were ripping into his flesh.

Once more, the mechanism stopped and Tom was left dangling helplessly from his chains.

A camera started to flash. They were taking photos of him. They recorded video footage of him hanging in his bondage.

And then, when Tom felt like he couldn’t bear the pain any more. They lowered him back down onto the ground.

They released him from the hanging chain and carried him through a door into a much smaller room. It was perhaps around three metres square. A single dim light bulb struggled to illuminate the gloom. There were small dirty windows high up along one side of the room. Metal bars ran along the length of the windows.

In the corner of the room there was a high back metal chair with a collection of chains attached.

On one wall there were four anchor metal anchor points. A couple of links of chain hung from each point.

The kidnappers pushed Tom up against the wall. His wrists shackles were connected to the points above and out to the side of his head. His legs were spread and his ankle manacles were also locked to the anchor points.

Tom was now chained spreadeagle to the wall, his firm, muscled athletic body on display.

His captors walked out of the room and closed the door behind them. Tom heard it being locked.

Tom slumped but his chains held him firmly against the wall.

His shoulders and arms still burned from their previous hanging torture.

Tom was alone, naked apart from his tight blue speedo…and Tom was in chains…a prisoner…locked in metal bondage…with no hope of escape.