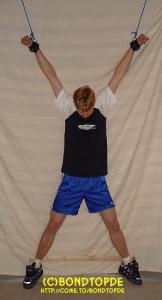 the moment i walked into Mark’s den i could tell i was in for much more than i had bargained for. between the den and the study was a large, open, double-sized entry way cut into the wall. i immediately noticed that four big, heavy eye-hooks had been screwed into it’s frame at each of the four corners. there were four lengths of heavy clothesline running through each of the loops in these eyehooks. four thick leather straps hung from one end of each of these ropes. the ropes were threaded through the hoops and then fed to winches which had been installed into the top and bottom at the midpoints of the doorframe. the straps nearest the floor were fed to the bottom winch and conversely, the straps near the ceiling to the top winch.